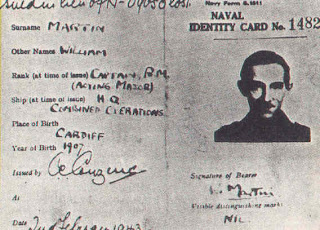 I must write in English, because I' am afraid I won't pass the exam from the Official Language School. I write very badly in English so I'm practicing here. I apologize for my grammar mistakes. And I’m sorry about writing in English, but it’s my blog and I have to do it if I want to pass. Please, tell me if you think that I made a mistake, because I need it! I start this experience with a WWII story: The Operation Mincemeat.

In 1943, the African Campaign was finished and the Allies wanted to go to Italy to defend the British bases of Malta. But German and Italian troops were more numerous there. So, MI5 thought that they should fool German intelligence. They organized one strategy: they would give false information to Hitler. They caught a dead man and they invented a new story for him. The man was called William Martin and they made him a captain. They handcuffed a briefcase to his hand and they put false information in it: the allies would go to Greece. At 04:30 a.m on April 30th, the dead body was left of the Huelva coast  by a submarine, the HMS Seraph comanded by Lt. Norman L.A.Jewell. He was the only one who knew they would make. He ordered the men not to go up to the deck and he went up with the officials. He said the true of the mission and, they prayed for the capitan Martin, all together. After that, they left the dead body into the sea, in the coast of Huelva, where a fisherman of Punta Umbria -José Antonio Rey María- found it.

The MI5 knew that a very active German spy was stayed in Huelva and they knew that Spanish govern collaborated with him.This was correct and the information was sent to Berlin. Hitler ordered to change the troops and he sent these troops to Greece. When the MI5 knew this they sent a telegram to Churchill. It said “Mincemeat Swallowed Whole”: the plan had gone well, and the Allies conquered Sicilia at August 9th.

But the story of Williams Martin is very interesting because the MI5 made it of his life. They wrote some postal from his father and his girlfriend. They made the ID card, took a pictures with a double from him and of his girlfriend. And they made all his military story. The man whose body was used for the pan didn't exist any more. He was buried in Huelva and now we know who he really was: he was a homeless and alcoholic called Michael Glyndwr and he died poisoned with rat poison.

In English
Etiquetas: In English